The resistor in a passive electrical component that can be found in nearly all electronic devices. Resistors have a resistance that reduces the current flow through a circuit. The resistance is measured in ohms (Ω).

The behavior of the resistor is described by Ohm's law. Ohm's law states that the current is equal to the voltage divided by the resistance:

This formula shows that the current will decrease when the resistance increases. If, for example, we have a 20 ohm resistor connected to a 5 volt battery, there will flow a current of 5/20 = 0.25 amperes through the resistor.

Resistors can be connected in series. The resistance is equal to the sum of all individual resistances.

The resistance of most resistors can be calculated by the colored bands. Four band resistors are the most common. The first two bands represent a number between 00 and 99. This number is multiplied by the value represented by the third band. The last band gives the tolerance. You can find more information about the color codes here.

SMD resistors use numbers and letters instead of colors. Most SMD resistors have three numbers. The resistance is equal to the first two digits multiplied by ten to the power of the third digit. You can find more information about SMD codes here 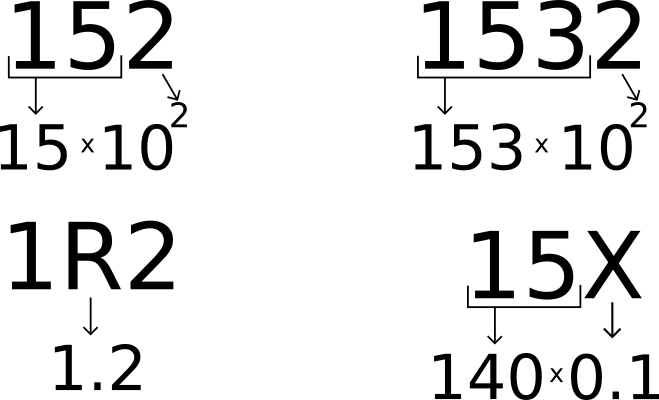